My Only Friend Through Teenage Nights…

I don’t much like the Economist… its not that their analysis is flawed, nor that its not informative, its world class in these respects, but the smug tones in which it is written. Too often I read “The Economist believes” in such and such, or “The Economist welcomes” the move by the Bank of England or wherever…  as if the magazine is somehow a revered font of all knowledge to be paid tribute and courted. These really are minor quibbles in comparison to the wealth of information and good writing between its pages, but it irks me none the less.

Tim Myatt was well pleased therefore (two can play this game!) when they launched Intelligent Life. It’s a quarterly publication, thicker and more, well, ‘lifestyle,’ than its weekly sibling. Here is a link to its website.

So, why am I telling you about this? I was snatched by an article about Test Match Special… the BBC’s utterly bonkers, bewildering, unashamedly Public School, but sublimely brilliant live cricket commentary. I have been an avid fan for all my adult life; listening to the likes of Aggers, Blowers, Jonners and the boys (usually retired ex-cricketers… and boys is a far from accurate description…) discussing pork pies, the number 42  bus, the ‘turn of the pitch,’ the slope at Lords, and other meandering waffle while the rain hammers down on the English summer. 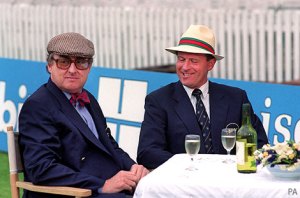 'Blowers' and 'Sir Geoffrey' enjoy a glass after a hard day rambling.

I was even lucky enough to have the success of my DPhil viva announced on air, and on the website for the text commentary. As chance would have it, the morning after my viva the rain abated, and England were flaying a bedraggled Sri Lankan attack all over a sunny day five at Lords. During the morning preamble Tom Fordyce, the online text commentator, suggested that Kevin Pietersen could “Perhaps draw inspiration from the story of Francis Younghusband. As a young man, Youngers was the classic soldier of the Empire – crossing Gobi desert, fighting in the Boer War and part of the first British expedition to the Dalai Lama’s court in Tibet. Fast forward a few years and he had changed his name to Svabhava, “follower of The Gleam”, become a prophet of free love and penned a book entitled “Life On The Stars: an Exposition of the View That On Some Planets Of Some Stars Exist Beings Higher Than Ourselves, And On One A World Leader, The Supreme Embodiment Of The Spiritual Leader, Which Animates the Whole.””

This sparked a who days debate about Younghusband and his possible skills as a batsman, the ethics of empire, the Mission to Tibet, and the suggestion that we could not “rule out him inventing an early version of T20, played with a burning ball of fire.” I emailed in, and got a special mention of my thesis and my viva. I think I must be one of the only doctoral candidates to have their viva results announced by the BBC on live commentary… you can follow this link or find me here on the archived website: http://news.bbc.co.uk/sport1/hi/cricket/england/9506208.stm 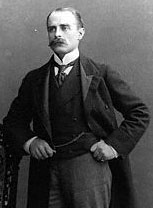 So, back to Intelligent Life. It seems that our friends across the pond can now access the TMS commentary, and find it as entertaining as me… David Thomson the author of the article, succumbs to waves of nostalgia as the semi-sporting ramblings are transmitted across the Atlantic. The article is here.

You too can follow it on Five Live Sports Extra, 198 Longwave, or on the BBC’s Website. The final test against India kicks off tomorrow. I can’t wait!