Ok, so after an entirely flippant, but amusing, picture of an item of kitchenalia shaped like a willy, something of a different nature. Yesterday I stumbled upon this image, and instantly fell in love with it… Its called ‘On the Aerodrome at Amman.’ It was taken during a series of meetings between British, Arab, and Bedouin officials in Jordan during April 1921.

The nervous looking chap in the serge suit is none other than T.E. Lawrence, ‘Lawrence of Arabia’ who looks entirely ill at ease with his attire and company; Sir Herbert Samuel is the moustache under the white pith helmet, and Amir Abdullah is the wily looking chap with the golden dagger. The image is part of  American Colony Jerusalem Collection at the U.S. Library of Congress.

However while Samuel dominates the photo, and Lawrence dominates the lore and history of the period, the most interesting part of the photo is in the far left of the image… the lady in the purple hat. I think its Gertrude Bell, but can not be sure. 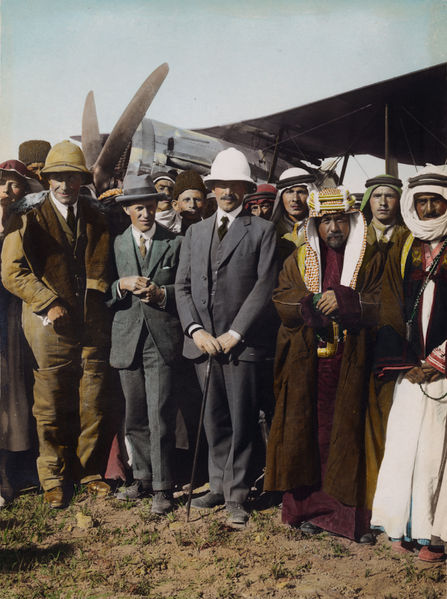 And if you don’t know who Gertrude Bell was, well shame on you! She was a writer, traveller, political officer, administrator, and archaeologist who explored, mapped, and became highly influential to British imperial policy-making due to her extensive travels in Syria, Mesopotamia, Asia Minor, and Arabia. Her main achievement was that along with Lawrence, she helped establish the Hashemite dynasties in what is today Jordan as well as in Iraq. She played a major role in establishing and helping administer the modern state of Iraq, utilizing her unique perspective from her travels and relations with tribal leaders throughout the Middle East. During her lifetime she was highly esteemed and trusted by British and Arab officials and given an immense amount of power for a woman at the time.

Alike to Lawrence in many ways, she has also been described as “one of the few representatives of His Majesty’s Government remembered by the Arabs with anything resembling affection.” (I admit to having lifted some of this bio from Wikipedia.) If you get a chance, her letters and diary, edited by O’Brien, Gertrude Bell: The Arabian Diaries, 1913-1914, is well worth a peek, but there are many other editions and prints of her writings.

While perhaps not as erudite as Lawrence (but then who actually is? I think him one of the best writers of the last century…) she gives a unique account and importantly, feminine, account of the politics and people of the Arab Revolt. Or perhaps given the developments in the region, we should now be calling it the First Arab Revolt?