So it seems that The Economist (see posts passim) does have a sense of humour… indeed a well developed one too. I thought I would leave it a while for this blogpost… I have not had anything to do with it, and death is rarely a laughing matter, but whoever helped Nigel Molesworth of St Custard’s write the recent obituary for the cartoonist Ronald Searle deserves a gong or two. 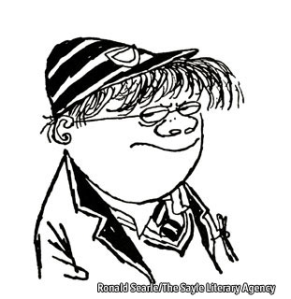 It opens: “ART is for weeds and sissies whose mater hav said Take care of my dear little Cedric, he is delicate you kno and cannot stand a foopball to the head. Whenever anebode mention Art they all sa gosh mikelangelo leenardo wot magnificent simetry of line. Shurely the very pinnackle of western civilisation etc.etc. Pass me my oils Molesworth that I may paint my masterpeece. The headmaster sa gosh cor is that the medeechi venus hem-hem a grate work so true to life reminds me of young mrs filips enuff said.”

All buoyant enough, but when it comes to the darkness that was the second world war, Molesworth reveals a subtle blend of humour, horror, ‘melankoly,’ and reverts to humour once more. No mean feat:

“A mistery voyage to Singapore then followed drawing all the way, but then come the Japs invading, Boom KABOOM!! ack-ack-ack-ack-ack, motorbikes roring by, urum-urum-urum-uraaaaaa, too late, into prison camp, still drawing. He staid four yeres there and was six stone when he left. A wunder he could smile agane after seeing men die all around him from cholera or torchure with bodes like sticks, but what he drew afterwards had a savvage melankoly underneath it as the art master sa, old majors with large noses and small handkerchiefs, dogs that are undoutedly plotting an evil dede, lugubrioos couples dancing hem-hem, criket bats and balls killing players at a single blo, a man catching music like flys in a jar, a child-hater selling balloons that carry the pathetik little weeds far away.” 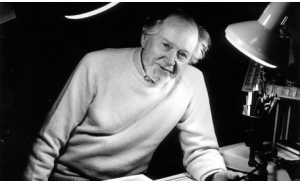 And if you have any doubts as to the horror of the Prison Camp into which he was placed, check out details of the infamous Death Railway; during its construction about 180,000 Asian labourers and 60,000 Allied prisoners of war worked on the railway. Of these, around 90,000 Asian labourers and 16,000 Allied POWs died as a direct result of the project. The dead POWs included 6,318 British personnel, 2,815 Australians, 2,490 Dutch, and  about 356 Americans. Searle was one of the few that left alive. His distinctive style, and creative genius will be much missed… “As any fule kno.”