In a great ‘short’ by the New York News & Features site Kevin Roose points out that Jack Lew is President Obama’s reported pick to replace outgoing US Treasury Secretary.

Lew is known as a no-nonsense backroom negotiator with wonkish tendencies, but he also has a really silly signature… it even was commented about this side of the pond (spoiler alert) on The BBC News site this morning in their ‘Seven Day Quiz.’

This would not normally be a problem, except for in the same way as Chris Salmon’s (The Chief Cashier) signature graces our bank notes if Lew is confirmed as Treasury secretary, his signature will feature on U.S. dollar bills… and that would look really silly! 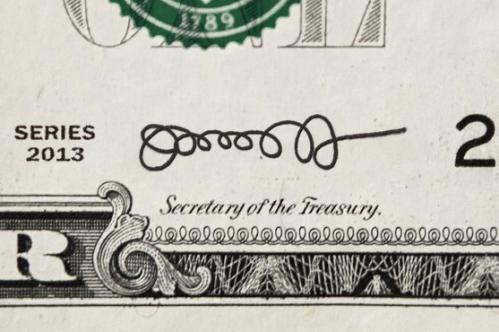 Indecently, it is actually Salmon who holds that “promise to pay the bearer on demand the sum of …” etc, not the Queen or the Governor of the Bank of England… so he must have a bit of cash lying about the place…