My Amazing Find: The Ark of the Covenant

I have some serious and important news to share with you all:

I have found the final resting place of The Ark of the Covenant.

For those of you who are not Biblical scholars, the Ark of the Covenant is the chest described in the Book of Exodus as containing the Tablets of Stone on which the Ten Commandments were inscribed. The Biblical account relates that about a year after the Israelites’ exodus from Egypt, the Ark was created according to the pattern given to Moses by God when Israel was encamped at the foot of Mount Sinai. The Israelite armies carried the Ark on their campaigns hidden under a large veil made of skins and blue cloth, always carefully concealed, even from the eyes of the priests and the Levites who carried it. It was captured for some time by the Philistines, before King David re-captured it, and it was placed in King Solomon’s Temple. In 597 BC, the Babylonians destroyed Jerusalem, and Solomon’s Temple, and the Ark has never been seen again.

Of course that was until the Nazis found it, leading to the entirely factual account given in the documentary, Indiana Jones and the Raiders of the Lost Ark. You can see it clearly shown here and on the promotional poster for the documentary.

At the end of the epic account the Ark is shown being wheeled carefully away for “study” by “experts” in a large warehouse in belonging to the US Government. But I have found it.

The Americans obviously gave it to the University of Oxford for research, as it is now in Christ Church Cathedral, as my photo below clearly shows. Obviously I did not lift the sacred covering, in the knowledge and fear of the fate of Uzzah (see here if you know not of which I speak…) but I am sure it is the Ark. I wonder if the University know that they still have it? 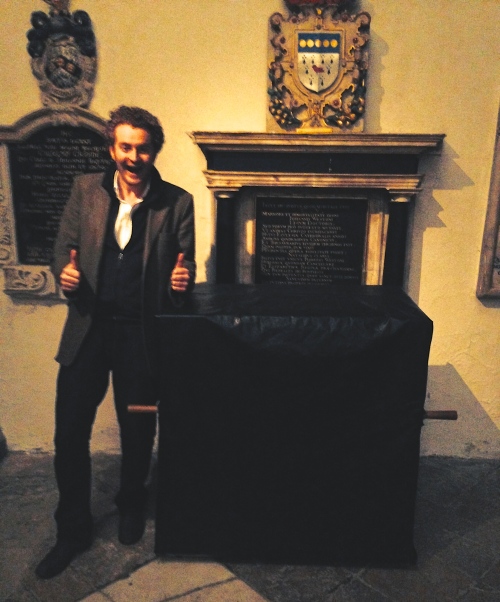