I was immeasurably saddened to learn recently of the death of Hugh Leach. I knew Hugh through the Royal Society for Asian Affairs, where he was the long standing and much admired historian, however over the years he kept cropping up at all sorts of events, and in the oddest places; Abingdon School reunions, charity dinners, the East India Club, and the like. He was essentially an Arabist, soldier, and diplomat, who endearingly listed his interests as ‘vintage cars, early Christianity, crystal sets, and circuses.’ As an example of the breadth of his scholarship, understanding and experience, in this History Today article Hugh draws on his experiences working with Arab tribes to examine T.E. Lawrence’s strategy in the Arab revolt. He was a warm, affable, intensely well informed, sprightly, mischievous sort of chap, with history in his fingertips and a twinkle in his eye. I liked him enormously, and he seemed genuinely fond of me and my interests in the field.

This is by no means intended as an obituary of Hugh, as I am sure these will follow in official publications and lectures (see here for the Telegraph’s), but the following article in the Peckham Perculier, gives an indication of the man. In the biog Hugh describes himself, his interests, and sadly even portends his own death. I will let him do the explaining:

“I’ll be going to the grave in not very long, and I hope I never know the difference between a computer and a commuter, a blog and a frog, an iPod and a tripod, a Blackberry and a gooseberry, and a Kindle and a spindle. I was in the army for many years and spent a lot of my career in the Middle East. I was the first tank ashore at Port Said during the Suez Crisis in 1956, and I rather naughtily took some photographs as we landed. I’ve just presented a huge scrapbook of the pictures to the Tank Museum at Bovington.”

Hugh describes how he decided to stay on in the Middle east after his regiment was to return to Germany, and a fascinating anecdote about his selection to the Arabic school. After the army Hugh transferred to the Diplomatic Service, and in the middle of it all ran away and joined the circus. Obviously. He recalls his days in the circus, return to London to research Islam and the rise of fundamentalism, retirement in which he lead expeditions with Freya Stark and Wilfred Thesiger, and on one occasion put an advert in The Lady magazine that said, “Retired former army officer seeks temporary accommodation”. He got three replies, not offering a house, but asking for his hand in marriage.

You can read the full article here, and also find a link to Hugh’s history of the RSAA, Strolling about on the Roof of the World, here. 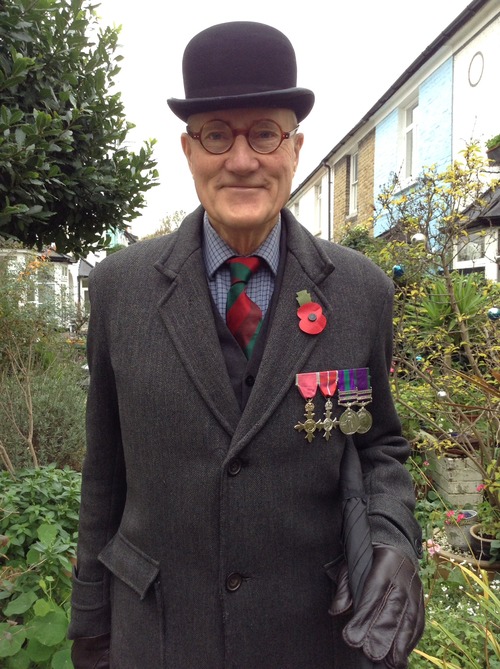