The Daily Telegraph occasionally, just occasionally, turns up an absolute blinder… something above the usual “Concerned, from Tunbridge Wells,” or “I was shocked and horrified to read….”

This week it’s underwater dogs. Nothing more complex than getting dogs to jump into a swimming pool (relatively easy… most dogs I have known love swimming about in water… especially dirty, smelly water…) and then taking a photograph of them underwater… Its all the idea of a brilliant artist called Seth Casteel, and you can find the rest of the images here on the Daily Telegraph website. 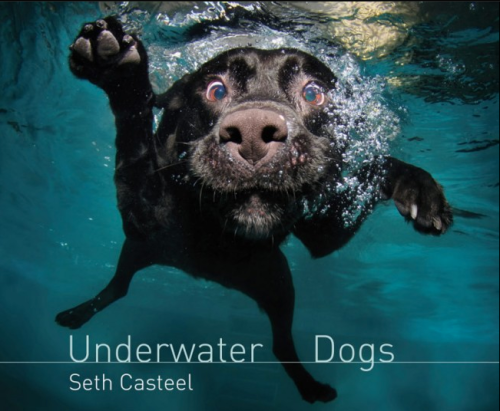 It  also seems that the DT has a bit of soft spot for silly animal pictures… a casual peek about the site over the weekend reveals Dogs in Halloween Costumes, and Surfing Dogs.

It’s time the the next round of “Guess Who Friday!” … can you name this well know figure? 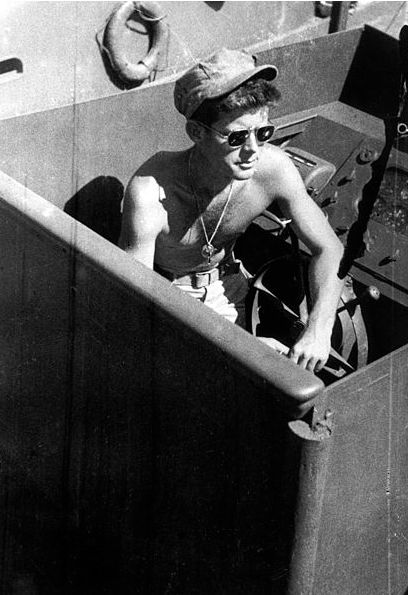 Tagged as Guess Who, Guess Who Friday

Lording it over the Olympiad

While the British tabloids debate the titles and honours that should be showered upon the British Olympic Team (and especially Wiggo’s go-faster sideburns) Lords Cricket Ground is hosting the Archery competition.

Metro have uploaded an awesome 360* digital image, taken from the upper tiers of the famous old pavilion, that you can rotate and zoom at will. I have never been into the pavilion (sadly my cricketing ‘prowess’ is not quite up to MCC membership, nor my wallet deep enough to afford the fees) but have always wanted to go and have a poke about. The pavilion contains all sorts of boring offices, changing rooms, and bars, but also the famous ‘Long Room.’ Players have to walk through the Long Room on their way from the dressing rooms to the middle, a route that is notoriously long and complex. So much so that on his Test debut, David Steele got lost “and ended up in the pavilion’s basement toilets.”

Despite its labyrinthine qualities, the view is awesome… a great place to watch the cricket, or indeed the archery! You can have a play here.

Keep Calm, and carry on…

A young German student called Oliver Harries created this brilliant animated short for part of his degree from the University of Dusseldorf. He deserves credit… it’s brilliant! (and you can see his other stuff here.)

It follows the story of a lonely radar/gun emplacement operative late one night during the Second World War… when a group of German fighter planes hove into view, only he stands between them and “this sceptre’s isle…”

This week’s photo contains two people you should get easily, and one you might struggle with… any suggestions?

and this one should not need any guessing… its too awesome a photo not to know who they all are! Perhaps a caption competition this time!?!

I recently found this marvellous picture of two amazing people. A (small) prize is offered if you can tell me who they both are!

This is a long line of Queen related lyric jokes…

The Ruins of Detroit

I like the BBC Photo collections… things like the “Day in Pictures” is a wonderfully distracting flick through over a cuppa in the morning. As they are so ‘mainstream’ I would not normally share them on here, but a recent collection really caught my eye and imagination.

The Ruins of Detroit was a five-year collaboration between French photographers Yves Marchand and Romain Meffre, who together documented the decaying public buildings of the city at the heart of the US motor industry that once stood proudly – but then became victims of the global recession. Detroit was at one time the car production centre of the world and many of its architectural gems, such as the waiting hall at Michigan Central Station, reflected the town’s prosperity. During this current downturn many are simply rotting away. Its all a little sad, but the images are magnificent.

Check out the others on the BBC website here, while the pictures are on show for the first time in the UK at Wilmotte Gallery, Lichfield Studios, London from 24 February to 5 April.

Tagged as old detroit, photographs of ruins, The Ruins of Detroit

As you can probably see from the photos below I have been amusing myself recently by wondering around Oxford learning new things about this old city. It’s still a beautiful city, and is especially picturesque at this time of year when the thin sun lights the stones, but offers little warmth.

I have especially been trying to make friends with the less well loved bits of Oxford; anyone should be moved by Christ Church, Port Meadow is photogenic beyond words, and the Rad Cam is a dazzling architectural tribute to learning, but what about the rest? Can anyone truly and honestly say that they appreciate Cornmaket Street? Marvel at the authority that exudes from County Hall? Are spurred to attain higher knowledge by the Westgate Library? No, I thought not. And its not like I am alone on this one… read what Bill Bryson in his Notes From a Small Island has to say about Oxford:

“You know, we’ve been putting up handsome buildings since 1264; let’s have an ugly one for a change.’ Then the planning authorities had to say, “Well, why not? Plenty worse in Basildon.”” ‘Then,’ Bryson continues, ‘the whole of the city -students, dons, shopkeepers, office workers, members of the Oxford Preservation Trust – had to acquiesce and not kick up a fuss. Multiply this by, say, 200 or 300 and 400 and you have modern Oxford. And you tell me that it is one of the most beautiful, well-preserved cities in the world? I’m afraid not. It is a beautiful city that has been treated with gross indifference and lamentable incompetence for far too long, and every living person in Oxford should feel a little bit ashamed.’ I can’t agree more.

While Bryson reserves his ire for the ‘criminally insane’ “bypass right across Christ Church Meadow,” I too have especial hatred for two bits of my beloved city: Carfax and The Plain Roundabout. Possibly the two most major meeting hubs of the city, opportunities to showcase our architectural prowess and history, but drab, boring, expressionless windswept junctions where bus-stops jostle for attention with knackered bike racks while everyone dashes past with eyes averted. I therefore decided to try and dig up some information that might induce me to love the unlovable, and care for the ugly. (After all, my mother managed to…) (had to get there before you lot did…)

The sad news is that I totally failed in both counts… both had architectural curiosities and interesting features, but the emphasis here has to be on the ‘had.’

Carfax derives its name from the Latin ‘Quadrifurcus,’ or the French ‘Quatre faces.’ It is one of only two places in England where the two crossing road both change their names… giving the four ‘faces’ (and there is a prize if you can tell me the other one…) The Tower at the northwest corner of Carfax is all that remains of the 13th century St Martin’s Church. The tower is a rather unimpressive 23 meters tall, and this was set as the maximum hight of any subsequent build in central Oxford, resulting in a rather low rise cityscape. Unimaginative at best, especially when it is not even the oldest building in Oxford by a country mile …  It was the official City Church where the Mayor and Corporation were expected to worship, between about 1122 and 1896, when the main part of the church was demolished to, wait for it… make room for traffic. Great; so we collapsed the primary church in the city, in the prime location, to make way for a taxi rank and bus stop. 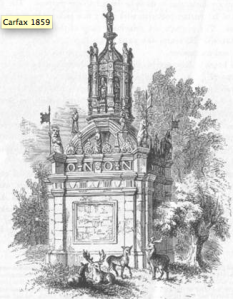 But wait… there’s more… in 1610 the city erected a conduit at Carfax to feed water to the vicinity. A nice, stone, noble sort of thing… practical too, especially if you like to drink clean water, which most people do. However by 1789 the city planners had obviously already decided upon the devastation of Carfax and promptly gave it to Lord Harcourt, who set it up in Nuneham Park, allowing the original site to be widened for, yes,  coach traffic.

To cap it all, Carfax’s only two features of note are an original Gilbert Scott K2 phone box and a small ‘peace stone.’ Even these are rather pathetic; the K2 was not originally located there and was moved in to please tourists, and the peace stone proclaims the short-lived peace when Napoleon was imprisoned on Elba in June 1814. Waterloo was still to come.

So what of the noble Plain Roundabout? That has a nice water fountain sort of thing… surely that has some merit?

The octagonal building, designed by P.E. Warren in 1899, is supported on eight Tuscan columns, has a central fountain with a scallop motif and four cocks, and a conical tiled roof with clock and weather vane… all very quaint, but a little out of place in the middle of a busy roundabout.

The structure was rather typically opened two years late, some time after Queen Victoria’s Diamond Jubilee, on the site of the old toll-house. The fountain no longer works, and the troughs for the horses are filled with flowers in summer… if they are not ripped up by students marauding home after a night on the tiles down the Cowley Road.

The only other possible source of interest for the site is also now missing… a war memorial dedicated to the 142 men of the First Battalion Oxfordshire Light Infantry who died in the South African (Boer) War of 1899 to 1902. It was shipped off to Dalton Barracks near Abingdon in the 50’s to make way for… you guessed it… more traffic.

The actual statue is rather nice… see below. It was unveiled by the Bishop of Oxford on 19 September 1903 in the former churchyard of St Clement’s Church (now the site of the Plain roundabout.) It’s an interesting aside that the 1st Battalion of the OBLI were under orders for India, and the ceremony took place while it was still unfinished so that they could be present: There was no statue on top of the plinth at the time of its ‘unveiling.’

Between 4,000 and 5,000 people attended the ceremony. The procession, headed by the Mayor’s Sergeant carrying the City’s Mace, started at Magdalen College School in Cowley Place.

General Green Wilkinson said with a certain amount of posthumous irony that the memorial was “a sacred possession, and would be handed down for many years in the City of Oxford amongst the beauiful buildings and historical houses.” The Mayor said that they had tried to find a site even more public than the Plain, but it would nevertheless “be always prominent before the citizens.”

How sad that it is now in a site nowhere near prominent to the hearts and minds of the good citizens of Oxford; on a barracks in Abingdon.

Bryson acknowledges Oxford’s many virtues: in his view ‘it has moments of unutterable beauty’ and ‘a scattering of prospects that melt the heart’ and he speaks too of ‘being immersed in an architectural treasure house, one of the densest assemblages of historic buildings in the world’, but he also warns that in the light of the city’s planners’ appalling lapses over the years there is little room for complacency. I could not agree more, and believe me, if I could call the Luftwaffe back to have a go rearranging Carfax and the Plain, I might just consider it…