Lording it over the Olympiad

While the British tabloids debate the titles and honours that should be showered upon the British Olympic Team (and especially Wiggo’s go-faster sideburns) Lords Cricket Ground is hosting the Archery competition.

Metro have uploaded an awesome 360* digital image, taken from the upper tiers of the famous old pavilion, that you can rotate and zoom at will. I have never been into the pavilion (sadly my cricketing ‘prowess’ is not quite up to MCC membership, nor my wallet deep enough to afford the fees) but have always wanted to go and have a poke about. The pavilion contains all sorts of boring offices, changing rooms, and bars, but also the famous ‘Long Room.’ Players have to walk through the Long Room on their way from the dressing rooms to the middle, a route that is notoriously long and complex. So much so that on his Test debut, David Steele got lost “and ended up in the pavilion’s basement toilets.”

Despite its labyrinthine qualities, the view is awesome… a great place to watch the cricket, or indeed the archery! You can have a play here. 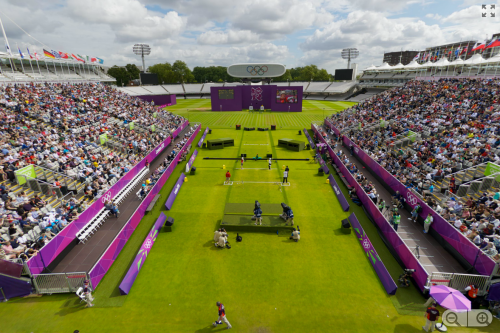