The Sound of the Charge of the Light Brigade

Ever wondered what the bugle call would have sounded like during a cavalry charge? (It turns out, this is the place to find out!)

Extraordinarily one of the survivors of the Charge of the Light Brigade, Trumpeter Landfrey, from the 17th Lancers, later made a recording on an Edison cylinder. And its a very special recording; Trumpeter Landfrey sounded the bugle charge at Balaclava in 1854, but the recording (made in August 1890) was made with a bugle which had been used at Waterloo in 1815. You can listen to him, and the recording below. I think it would make a great ringtone or alarm clock! 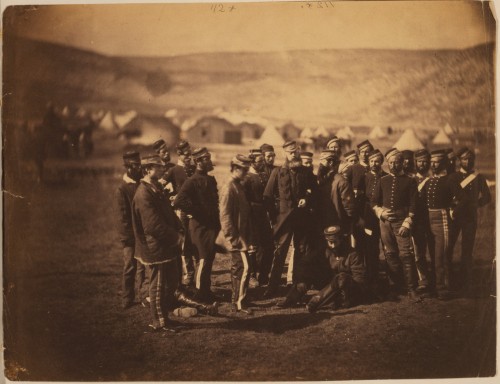 The photograph shows the Officers and men of the 13th Light Dragoons, survivors of the charge, photographed by Roger Fenton shortly after the battle.