While there has been a lot of chatter about Nico Rosberg edging Lewis Hamilton out of last weekend’s F1 Belgian Grand Prix, few eagle eyes will have noticed a small design on his race helmet. As the German driver clambered out of his car to face the podium, his team, and his critics, I noticed a small Tibetan Buddhist emblem on the front grille of his Mercedes-AMG Petronas helmet. 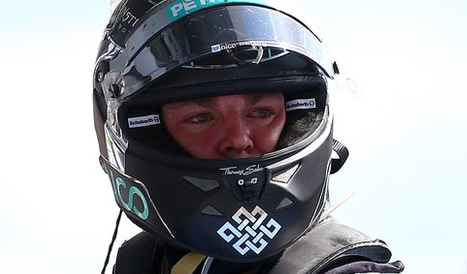 Rosberg designed the helmet together with his girlfriend. He calls it his “Full Attack” design, and it is mainly comprised of black and turquoise, a colour strongly associated with Tibetan Buddhism. He describes the Tibetan motif as “something personal” but does not elaborate further. You can watch his full explanation here. It’s about as emotional as he gets!

The design is an endless knot (dpal be’u for all you closet Tibetologists out there) which is a closed, graphic ornament composed of right-angled, intertwined lines. It overlaps without a beginning, or an end, symbolising the Buddha’s endless wisdom and compassion. It indicates continuity as the underlying reality of existence.

The intertwining of lines represents how all phenomena are conjoined and yoked together as a closed cycle of cause and effect. Thus the whole composition is a pattern that is closed on in itself with no gaps, leading to a representational form of great simplicity and fully balanced harmony. See here for a full explanation.

Tibetans and Buddhists often copy the design on a gift or greeting card as this is understood to establish an auspicious connection between the giver and the recipient. At the same time, the recipient is goaded to righteous karma, and reminded that future positive effects have their roots in the causes of the present. This interconnectivity, and the social dues that go with it, were first properly analysed and commented on by the French sociologist Marcel Mauss in his 1925 essay Essai sur le don. Forme et raison de l’échange dans les sociétés archaïques (An essay on the gift: the form and reason of exchange in archaic societies) and expanded upon in his seminal anthropological treatise ‘The Gift.’ It is a great, and short, introduction to the fascinating field of Anthropology.

One can only hope that Hamilton too has done his homework, and acknowledges that the knot represents a connection, a link between their fates and karmic destiny, but does not ‘connect’ with it further. I can assure him that the symbol will be the same when viewed in a rear view mirror. 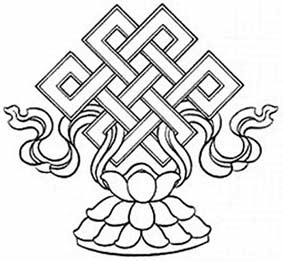