There are few things in life more satisfying than when a really good prank comes off… one of those that require a little planning, brass, and normally take a gentle rise out of the pompous old guard. If you have not read it then The Spiritual Quest of Francis Wagstaffe of a masterpiece of this genre written by a dear friend of mine David Johnson (you might know him as the drunk vicar…)

Wagstaffe wrote to prominent people, mostly Anglican bishops, but also others including  Ted Hughes, Roy Jenkins, Cilla Black, Rocco Forte, Stella Rimington, and Melvyn Bragg as well as organisations including the Royal Air Force, the Royal Artillery, the BBC, British Rail, Madame Tussauds, the Victoria and Albert Museum, and the Russian Embassy. In each and every case these bastions of British society are fooled and ridiculed by Wagstaffe.

In the earlier letters he poses as a purveyor of Cumberland sausages and former prep school proprietor who is seeking guidance on the Christian faith, and in the later letters he poses as His Grace the Most Reverend the Archbishop of the Old Northern Catholick Church of the East Riding Mar Francis II Metropolitan and Primate, Knight Grand Commander of the Order of Saint John of Beverly (1st Class).

The Spiritual Quest of Francis Wagstaffe supported St Peter’s Young Homeless Support Centre in Highfields, and is still available here on Amazon. If you want the book to hold its value, dont allow David to sign it… the unsigned editions are much rarer, and mercifully now beyond the edict of the Bishop of Northampton…

Anyway, where was I… Oh yes, pranks. I only discovered the infamous ‘Dreadnought hoax’ a few days ago, and it’s a real gem… the pride and top brass of the Royal Navy were taken in hook, line, and sinker by a certain  Horace de Vere Cole and some of his more famous friends of the Bloomsbury Group. 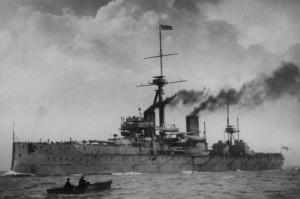 The hoax was devoid by Cole who tricked the Royal Navy into showing their flagship, the warship HMS Dreadnought, to a supposed delegation of Abyssinian royals. It must be hard to imagine a battleship more impressive than The Dreadnought; Her entry into service in 1906 represented such a marked advance in naval technology that her name came to be associated with an entire generation of battleships, the “dreadnoughts”, as well as the class of ships named after her, while the generation of ships she made obsolete became known as “pre-dreadnoughts”. It was quite literally, and if you can forgive the pun, a ‘sea change’ in naval technology. She was the RN’s new darling, the pride of the fleet, as well as being the most awesome piece of technology on the planet.

All the more amazing was that Cole and five friends—writer Virginia Stephen (later Virginia Woolf), her brother Adrian Stephen, Guy Ridley, Anthony Buxton and artist Duncan Grant—who disguised themselves with skin darkeners and turbans, were welcomed abroad the mighty ship as visiting dignitaries.

On 7 February 1910 the hoax was set in motion. Cole organised for an accomplice to send a telegram to HMS Dreadnought which was then moored in Portland, Dorset. The message said that the ship must be prepared for the visit of a group of princes from Abyssinia and was purportedly signed by Foreign Office Under-secretary Sir Charles Hardinge.

Cole with his entourage went to Paddington station where Cole claimed that he was “Herbert Cholmondeley” of the UK Foreign Office and demanded a special train to Weymouth; the stationmaster arranged a VIP coach. In Weymouth, the navy welcomed the princes with an honour guard. However an Abyssinian flag could not be found. In a piece of marvellous logic the navy proceeded to use that of Zanzibar and to play Zanzibar’s national anthem. Oddly nobody objected, and the party was piped aboard the mightly warship.

The group inspected the fleet. To show their appreciation, they communicated in a gibberish of words drawn from Latin and Greek; they asked for prayer mats and attempted to bestow fake military honours on some of the officers. An officer familiar with both Cole and Virginia Stephen failed to recognise either.

When the prank was uncovered in London, the ringleader Cole contacted the press and sent a photo of the “princes” to the Daily Mirror. The group’s pacifist views were considered a source of embarrassment, and the Royal Navy briefly became an object of ridicule. The Navy later demanded that Cole be arrested. However, Cole and his compatriots had not broken any law… just rather dented the pride of Him Majesty’s Royal Navy.

During the visit to Dreadnought, the visitors had repeatedly shown amazement or appreciation by exclaiming, “Bunga! Bunga!” When the real Emperor of Ethiopia, Menelik II, visited England some time later, he was chased by children shouting “Bunga! Bunga!”. Silvio Berlusconi would have be proud.