A Terrifying Trend: Self-immolations in Tibet

Finally the US has found some voice of protest concerning the current, horrifying, trend of self-immolations in Tibet over recent weeks. For more news on one such recent protest follow this link, and sadly there have been many such instances in the last few months.  U.S. Secretary of State Hillary Clinton used the occasion of the Asia Pacific Economic Cooperation forum to address the issue saying that the US was, “alarmed by recent incidents in Tibet of young people lighting themselves on fire in desperate acts of protest… We continue to call on China to embrace a different path.”

“And let me take this opportunity to again call on the Government of China to respect the rights of all of its citizens who peacefully express their desire for internationally recognized freedoms, and particularly the rights of Tibetans to resolve their underlying grievances with the Government of China.” These quotes come from the International Campaign for Tibet, and more can be found here.

I should declare my interest in this sorry situation; While I was an English teacher in the small monastery of Dip Tse Chok Ling in Dharamsala I lived in the former cell of Thupten Ngodup (pictured), the former cook and cow herder of the monastery. 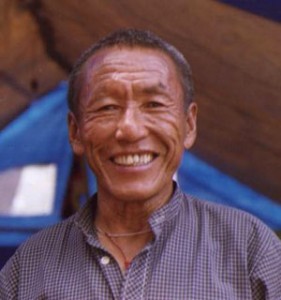 It was in 1998 in Delhi that the Tibetan Youth Congress organised a ‘Hunger Strike unto Death’ to pressure the United Nations to implement the International Commission of Jurist recommendation of 1997 report on Tibet. The first batch of hunger strikers consisted of six members of TYC, but the demonstration was disrupted and broken up by the Indian police on their forty-ninth day of fasting. Thupten was part of the second batch of hunger strikers, and set himself alight on 29th April, 1998. Accounts of his death vary, but one, harrowing one, is based on filmed evidence, and can be found here (warning, its not comfortable reading):

“A video shot by Choyang Tharchin of the Department of Information and International Relations (DIIR) shows Thupten making his way to the public toilet. He opened a plastic container of gasoline, which he must have hidden there earlier, and dowsed himself thoroughly. Then he struck a match or flicked a lighter. .. When he came out he was, quite literally, an inferno. The DIIR video makes that horrifyingly clear. We see him charging out to the area before the hunger-strikers tent, causing chaos in the ranks of the police as well as the Tibetans there. A very English female voice — off camera — screams’ “Oh my God” Oh My God” again and again. With that and other screams and shouts, it is impossible to hear what the burning man is saying. According to someone there he shouted “Bod Gyal lo” or “Victory to Tibet”. Others heard him crying “Bod Rangzen”, or “Independence for Tibet.” He also shouted “Long live His Holiness the Dalai Lama”. How on earth he managed to shout anything, much less run about as he did is a mystery to me. Every breath he took must have caused live flames to rush into his lungs and sear the air sacs and lining.

The burning man then appears to pause and hold up both hands together in the position of prayer. At this point the fire seems terribly intense and the cameraman later remarked that he could distinctly hear popping sounds as bits of flesh burst from Thupten Ngodup’s body. The cameraman was so shaken he found it difficult to hold his camera steady. Then policemen and Tibetans beat at the flames with rugs and sacks, and finally pushing Thupten Ngodup to the ground, stifled the blaze.”

I moved into his small cell only a few months later in late 1998. People often ask me why I ended up studying Tibet; why something quite, so, well, pointless? I guess living in such a monastery and community had a profound effect on me, and planted a small seed that really has only begun to germinate. More important, and sad, is that the situation that lead Thupten to set himself alight is still prevailing.

While the international finger pointing goes on, with the Chinese news agencies bitterly criticising the Dalai Lama for not condemning the protests, and the Tibetan Government in Exile urging restraint and dialogue, one thing is for sure, I fear that this distressing and despairing trend will sadly continue.