Aside
↓ Jump to Comments

What has he got in his pockets’s? Ronald’s metal.

I was confirmed into the church this last Sunday. It was an odd service, lots of latin and incense, but it was enjoyable, and I was really pleased some of those dearest to me came along to support me. Obviously we all went to the pub afterwards.

The two local vicars who have been supporting me, teaching me, and providing confirmation classes even gave me a gift… a small wooden cross. I think it’s made of olive wood…which would make sense… I guess it’s far too big to go on a string round my neck (and that’s not really “how I roll,”) so perhaps it’s more of what I would call a ‘touch stone’… something to have in a pocket, and hold while you think about things. 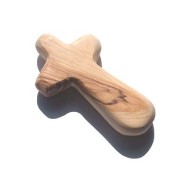 When you think about it, we all have these things. Either in a frame of mind, an actual physical place, an object or item, that helps us think, focuses our mind, and reminds us of important things. Sometimes we carry these things around in our wallets (think of the number of people, who just “happen to have a photo of a loved one” in their wallet,) have them dangling round or necks, over the dashboard of the car, round the bed post, over the door lintel, or in that box of memories we have in the bottom draw at home. They can also be more temporal; a photo or video saved to a mobile phone, or a mental image of a person or place that links us to them. They are important and useful.

I was reminded of this, in a very real sense when I came across the story of Ronald Brown in the papers earlier this week. Ronald stepped on a land mine while on a mission in France in 1944. Luckily, the blast did not kill him, but peppered his left leg with red-hot fragments of shrapnel, and he was forced to crawl two miles to safety. After surgery, he was told that it had not been possible to remove all the shrapnel from his leg, and that some was still in there. He told friends and family that he had a bullet in the leg. (Perhaps a forerunner of the internet meme “and then I took and arrow in the knee” … (If you are over 40, or have no idea what I am on about take a look here…))

Ronald carried this bullet, and quite considerable pain, for the rest of his life. I imagine it served as a constant reminder of the dark statistic, that of the 900 original members of his regiment, only 29 came home from the front. As if he would have needed reminding… His granddaughter, Holly, 22, said her grandfather “never spoke much about the war”. She said: “When we were very young he used to tell us not to sit on his knee because of the wound. You can read the original article in the Daily Telegraph here.

The full extent of what he carried with him was only revealed when he died earlier this month… After passing away at the grand old age of 94, his family had him cremated. They were however baffled when staff at the crematorium handed them back a big bag of shrapnel along with their loved one’s ashes.

It transpired that Ronald had been carrying about 6oz (about two handfuls, if you are non imperial) of shrapnel in his leg … odd, the things we carry about with us! 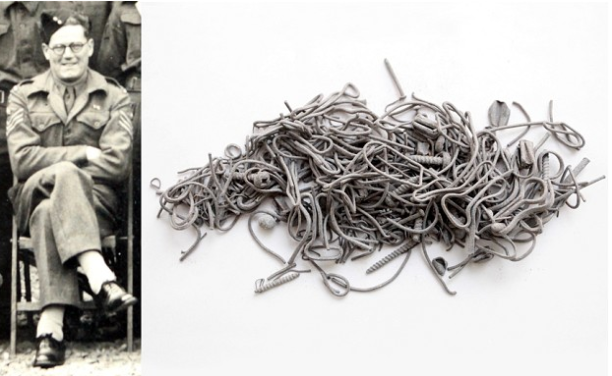