The Maharaja and the Monarch

A good friend of mine, San Cowan, has just published a brilliant article about a visit to the UK by The Nepalese Maharaja Chandra Shum Shere Rana in 1908. His research is first rate, and the article describes how the Maharaja forged close ties in the UK, especially the former Viceroy of India, Lord Curzon. Curzon was Chancellor of Oxford at the time of the meeting, and The Bodleian was recipient of a substantial number of texts thanks to the intervention of the Maharaja. These are used to this day.

A full copy of Sam’s article can be found here.

Bloodhound and the Traffic Wardens

Despite this being parked on Keble Road this afternoon, I did not see one Traffic Warden proffering their usual friendly Penalty Notices. Still with a top speed in excess of 1000mph (no, that’s not a typo) catching Bloodhound might be an issue. Until it reaches to a corner… 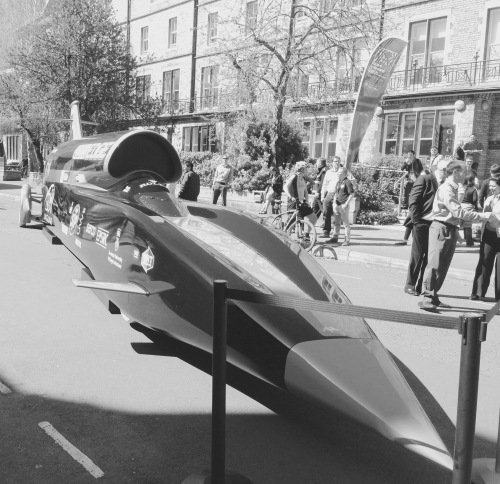 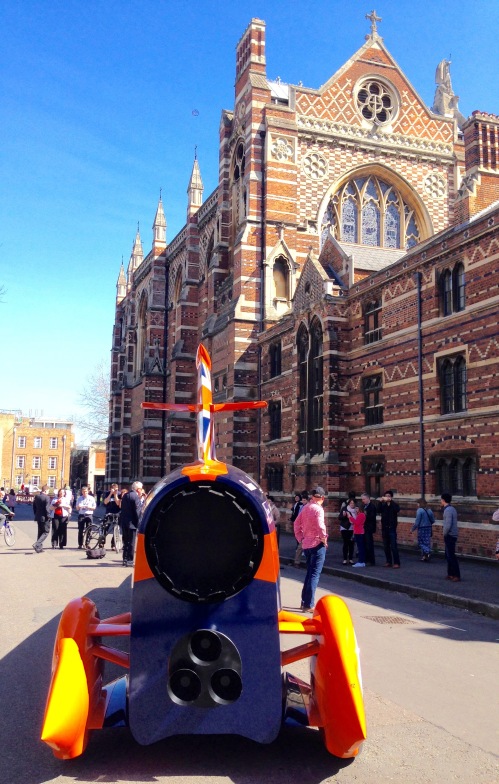 You may recall a few months ago I found the site where Turner painted his famous Fighting Temeraire.

I have always admired Turner’s paintings, and often wondered what he was like as a person as I amble past his former home on St John’s Street, just round the corner from my home. I had him down as a tall angular figure, probably dressed in green velvet, obsessive about colours and light, and who was prone to periods of mania and melancholy.

So I was naturally keen to see Mike Leigh’s new biography of the eccentric painter current topping the UK’s box offices. In an interview on the Kermode and Mayo radio show (if you dont subscribe, you have no idea what you are missing…) Leigh described how he had tried to recreate the life and person of the painter from diaries, letters, and had paid close attention to his recorded mannerisms and eccentricities. Leigh has described Turner as “a great artist: a radical, revolutionary painter,” explaining, “I felt there was scope for a film examining the tension between this very mortal, flawed individual, and the epic work, the spiritual way he had of distilling the world.”

Timothy Spall is unsurprisingly brilliant in the titular role. He appears is thoroughly convincing as a character, and portrays his mannerisms, cadence, and gruff exterior magnificently. My only criticism might be that he sometimes edges close to an almost Churchillian impression of Turner, and waddles more like the penguin from Batman than might be strictly necessary.

The film naturally features some stunning locations including Petworth House, Welsh Hills, Dutch landscapes and Kingsand stands in as a more picturesque Margate. The cast supports Spall well, but he is rarely off screen, and it has received rave reviews… even an Oscar tip for Best Actor and Director. One is left with a feeling of unease owing to his relationship, and I for one could not make up my mind if I liked Leigh’s Turner, or thought him abhorrent. I am not sure it should be watched as a biographical depiction of the great artist, more an opportunity to spend time in his world. There is little actual plot, but the narrative wanders along pleasantly, and you do get a good impression of the world in which he lived and worked. And if that makes us appreciate and understand his works all the more, it can be no bad thing.

And “Hello to Jason Isaacs.”

The Fair Queen and St Giles

Oxford has this week been turned over to the annual St Giles’ Fair. It has been the traditional riot of lights, colour, and smells (some good, some less so)… I always feel that it is such a shame that the fair is not held when the students are in term and can also enjoy it; however given that its history goes back to pre 1200, I guess the fair has precedence over the undergrads!

A couple of interesting snippets about the bonanza of bright lights and booze: I has enjoyed Royal patrons in the past, indeed, when Elisabeth I stayed in Oxford between 3–10 September 1567 she watched the fair from the windows of St John’s College on the east side of St Giles’. I bet she did not go on the dodge’ms though…

Traditionally, anyone with a beershop was allowed to bring barrels of beer to St Giles’ Fair for sale. The great Wikipedia also tells me that another custom was that any householder in St Giles itself could sell beer and spirits during the fair by hanging the bough of a tree over their front door. Next year I am going to make a fortune flogging gin and beer with only the help of a hanging bough! 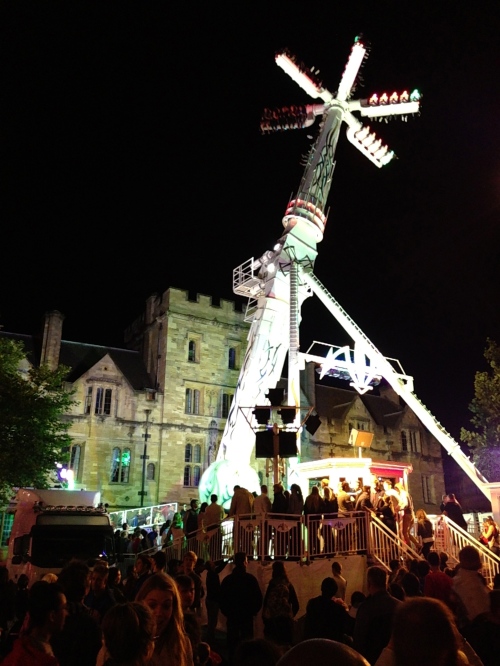 Another evening of hard labour draws to a close… 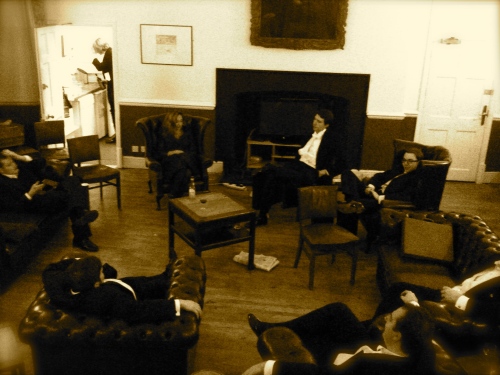 Grandma hid drugs between her legs

Some things you just can’t make up… Oh Oxford, I love you sometimes… and how on earth the Editor managed to steer his team from the inevitable headline gag I dont know.

This from today’s Oxford Mail.

A GRANDMOTHER was caught with her trousers down trying to conceal drugs between her legs.

Police raided Janice East’s house and found the 54-year-old in her bedroom trying to get rid of the evidence.

The grandmother-of-two, from Rose Hill had six wraps of heroin and five wraps of crack cocaine when officers swooped on October 5.

East was sentenced at Oxford Crown Court on Monday having earlier admitted two counts of possessing a Class A drug and breaching a suspended sentence.

Prosecutor Nikki Duncan said: “Police executed a warrant at her home address. They forced the door and went upstairs where they found her with her trousers pulled down. She was trying to conceal the drugs between her legs.”

The offence put East in breach of a four-month prison term, suspended for a year, which had been dished out by magistrates after almost identical drugs offences in May.

She has 31 previous convictions dating back to 1974.

Lucy Ffrench, defending, said East has been drug-free since November.

Judge Patrick Eccles jailed her for a total of 18 weeks.

Filed under Oxford: The Perspiring Dream

Calling Time on the Periodic Table

I just wanted to share this really excellent interview and article on my undergraduate tutor, Philip Stewart.

Philip, I am sure he will not mind me saying (not that I think he reads this blog) has been almost a grandfather figure to me (and no doubt countless others, including his own!) Time in his company is always uplifting, and his agile, interested and interesting mind is as open as it is resourceful. Anyhow, if you know Philip, I am sure you too will appreciate how highly I respect him.

Philip is a something of a polymath… an academic of the old school, he studied Arabic at Oxford, before taking a second degree in forestry. He then worked as a research officer and lecturer in Algeria, but taught Human Sciences and  Ecology back here till he notionally took retirement in 2006. Since ‘retirement’ he seems to have ever increasing numbers of books and grandchildren, and has recently become something of an authority on the poets of Boars Hill.

One of his most interesting projects has been to re-draw the Periodic Table. Rather than the staid and formal ubiquitous depiction that graces the walls of chemistry labs up and down the country, Philip’s is a spiral that swirls outwards as the number of neutrons increases. As Philip explains, “I conceived a passionate interest in the periodic table when I saw it represented as a huge, colorful spiral in the Science Exhibition of the Festival of Britain in 1951.” The result is not only innovative and accurate, but actually quite beautiful at the same time. You can order a copy for your wall here, or there is a free wallpaper download here.

Astronomy Photographer of the Year 2011

The annual ‘Astronomy Photographer of the Year Award’ is run by the Royal Observatory Greenwich and Sky at Night Magazine… again, not my usual reads. However the BBC news site has put together one of their ‘captions to music with someone explaining whats going on voiceover type features’ that are compulsive reading on a quiet Friday afternoon on POETS day. (Piss Off Early Tomorrow’s Saturday.)

The BBC explains; “From giant oval storms on the surface of Jupiter to colourful wispy remnants from a supernova explosion and the dazzling green curtain of the Northern Lights – nearly 800 images were submitted for the latest Astronomy Photographer of the Year competition.” One image stood out for me… the sun setting over our fair city. So with the obvious rider that I did not take this image, and have borrowed it from whoever did etc etc other Astronomy Photographer of the Year Awards are available etc etc etc, here it is:

The article can be enjoyed here.

The judges’ choice of the best images can be seen in a free exhibition at the Royal Observatory Greenwich, London, until February 2012

I have been helping a friend with her new Blog… It’s a bit like the blind leading the blind while we navigate the high seas of the web, but the project is going well, and I think we are both pleased with the results.

You can find her Blog at: http://pianowisdom.wordpress.com/ or follow this link.

Her approach is all about Piano Wisdom… Piano Wisdom is dedicated to committed pianists who have developed injuries through playing and who are looking for a long term solution towards their own pianistic health.  If you want to avoid operations and injections and sort out the root of your playing related problems, then this is for you! I have recommended her to a few of my ivory fingered friends, but if you have any questions, or indeed comments on her Blog, do get in touch.

The Blog currently features some snazzy new videos of her techniques for teaching, and thoughts on students learning the piano. The plan is to update it regularly, and incorporate new interview style videos and tips for gaining the best possible sound whilst tinkling the old Joanna!

Fantastic to Faceless: Lamenting the Loss of Sausage and Mash

This from Pennyforathink’sBlog… (which is excellent) about the demise of the Big Bang (which is sadly no longer.)

Max Mason in his coffin. RIP.

A really good appraisal of the sorry state of affairs in Jericho and the slow and grinding loss of “side street quirks, itty bitty little pubs and restaurants, higgeldy piggeldy shops, unusual and hearty local food and interesting people are what makes a town more than a grid system of streets.”

I could not have put it better myself… follow this link. I loved the line about “White bread consumerism for the 21st century; menus online, credit cards accepted.”

I have little doubt that Max will reincarnate somewhere, in some form, but for now, we have all lost something more than bangers and mash. 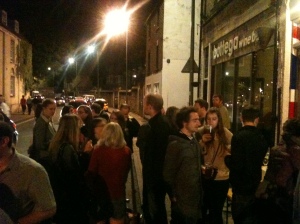 The Last Night of the Big Bang. Just before the coppers arrived. (again.)

Filed under Oxford: The Perspiring Dream